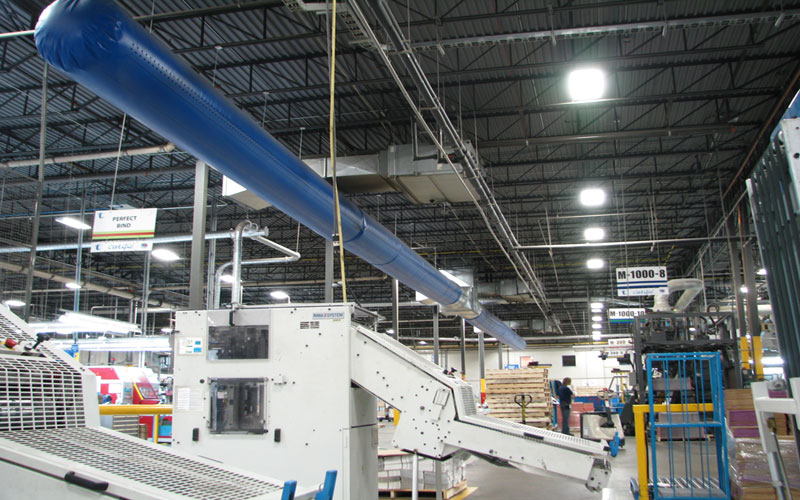 The Transcontinental printing factory in Boucherville, Qué. operates year-round non-stop 24/7.
It occupies approximately 200 000 ft2 of area.
The factory houses 5 printing presses powered by powerful engines, while the ink drying is realised with the help of natural gas ovens.
Water is used to cool the presses as well as the factory which generates considerable heat. 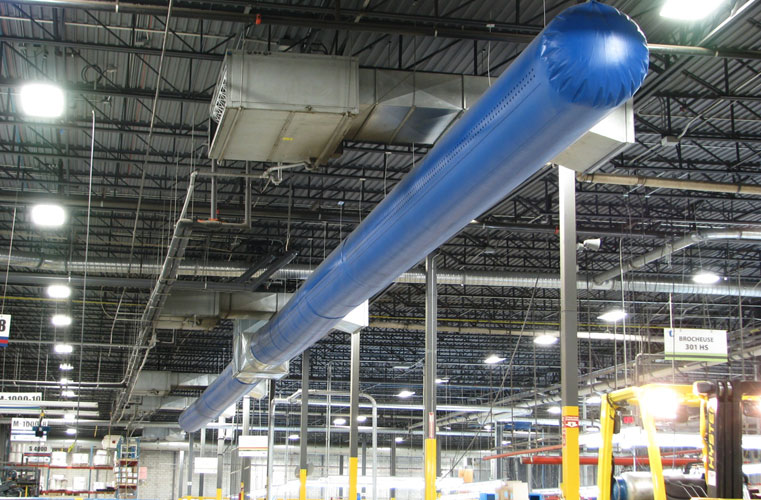 There were 3 mechanical rooms. To assure the cooling of the printing process and the factory, 8 coolers (400 to 500 tons on a capacity of 825 tons were used in the winter and 825 tons were used in the summer), 11 convector fans, 10 powerful circulation pumps totaling 290 HP, 4 air cooled condensers utilizing 26 electric motors of 1.5 HP and 2 water towers of 20 and 15 HP were used year-round. Furthermore, the factory was constantly in negative pressure mechanically extracting 50 000 CFM’s more of air than was coming in. (3 air compensation air units operating summer and winter totaling 90 000 CFM)

The analysis of the ventilation system determined that the compensation air is heated with natural gas, the factory was cooled with coolers while the condensers and the towers were evacuating the heat from the coolers to the exterior by way of the evacuators, the incinerator, and the air compressors.

In conclusion, enormous energy was spent continuously in hot and cold cycles.

Goals
To reduce energy costs of the HAVC systems
(estimated at 490 000$) as well as maintenance (60 000$),
to solve the negative pressure issues, the cooling of the outdoor air and other minor problems. 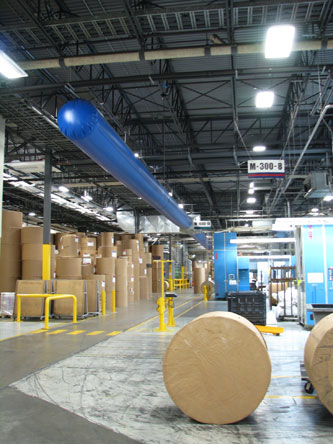 It was decided to regroup all the equipment into one mechanical room and to use all the exothermic cycles to heat the outdoor air and the factory free of charge. It was also decided to use free-cooling in winter and mid season for the process water and the cooling of the factory.

Absorption coolers replaced the small 30-70-ton air coolers. Finally, it was agreed upon that the negative pressure in the factory be neutralised to minimize the lose of energy through infiltration.

The grouping of the 3 mechanical rooms into one permitted the increase in reliability of the system, because all the pumps and coolers now have a (back up) reserve. The installation of the absorption cooler was based on environmental considerations.

Also, the recovery loops now use Propylene glycol instead of ethylene glycol because it is biodegradable in the case of a spill. Other measures were implimented including the usage fo biodegradable products in the water towers, water treatment system and the reduction by half of the R-22 refrigerant by eliminating 5 old coolers.

These measures reduced the maintenance costs of the system by 70%.

The ventilation of the factory is assured entirely by the high induction FDD flexible diffusers from NAD Klima. The FDD was conceived to surpass the technical limitations of conventional diffusers. It operates on the principle of high induction.

The variable size and the positioning of the perforations cause the displacement of high volumes of ambient air. The exchange of ambient air and forced air occurs in proximity to the FDD and the temperatures quickly reaches isotherm.
This eliminates stratification without causing air currents in occupied zones.

The installation of FDD has standardized the temperature throughout the factory, primarily in the occupied zones.

One of the major factors recorded was the absence of condensation inside the FDD diffusers, even during -28˚C conditions with an input air temperature of -15˚C.

Period of return on investment is 3,2 years without the grants and of 2,4 years with the grants