The SAL 50 diffuser has linear slots with 50 mm profiles. It is composed of extruded aluminum surfaces with  eccentric rollers which slide inside and are mounted on the plenum.
Each diffuser is supplied with a stabilising chamber, allowing for a uniform and silent airflow. 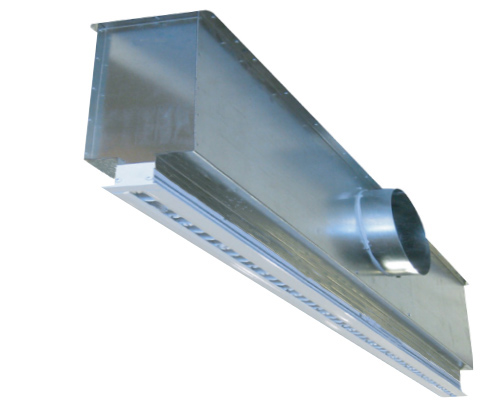 The SAL 50 is available with one or multiple slots depending on the application and the required amount of air. The diffusers may be mounted in series, one behind the other, creating a continuous
effect to the ceiling.

The SAL 50 permits optimal configuration of the ventilation system to meet the requirements of a room. A variety of airstream configurations, even after the unit has been installed due to the eccentric rollers.
The SAL 50’s technology provides high speed discharge of air with low acoustic power.

The laminar flow, the stability and the high induction generated from the very start of the outlet vent make the SAL 50 the linear diffuser of choice for high air flow rates and variable air volumes.

• Influence on the method of induction (diffuse mode), extension of jets (divergent mode).

• Stable laminar airflow and a variety of airflow directions available.

• Possibility of adjusting airflows, even after installation.

• Possibility of reducing total airflow rate as much as 25% in VAV.